I had an epiphany last night about the construction of knitting stitches while listening to Manning Marable’s Malcolm X: Life of Reinvention. So much I didn’t know about how the NOI dogged a brother, the actions of Louis X notwithstanding. But, more on that later. Let me tell you about this revelation.

I only learned to knit two years ago and have been mastering completing things correctly and making socks. I went and took a sock-making class right after I learned the rudiments. While the sock I produced was a disaster technically, it was

kind of cute, and I did learn quite a bit from making the mistakes. I was most proud of my kitchener stitch toe closure, but was more determined than ever to learn how to make toe-up socks.

The trouble with sock-making is the heel. If you don’t place your stitches correctly, you will wind up with little holes around the heel. I finally discovered how to make a sock and have no holes by becoming very mindful of the way the stitches face and their character after being worked. A correctly executed stitch results in hole-free socks that require no tedious finishing once made. I’ll show you what I mean. 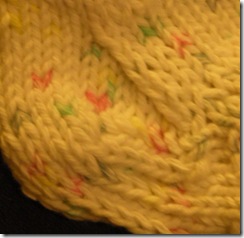 That is a picture of a well-turned heel without a hole to be seen that isn’t supposed to be there. All the stitches line up precisely because each stitch is knitted to face the appropriate direction when turned upright even though it is made in the round. It is the translation of one dimension into three.

There are particular pattern stitches used with making a SSK, for example. Slip, slip, knit is what the abbreviations stand for. There is a particular way you must slip the stitches in order to have the stitch lay in its correct position. You slip the first stitch purlwise, then turn the next stitch knitwise and knit both stitches through the back loop. If the SSK is not executed like this, but instead has both stitches slipped purlwise for example, you’ll get a hole! First, you have to master pick up and knit, which I was doing all wrong. I pulled out and used my Knitters Companion by Interweave to find out how to do this correctly, then discovered one must also turn the stitches to lay properly depending on the direction you are working on your item when you’re picking up and knitting. Stitches are either right side up or upside down, facing left or facing right,  when you are picking up and knitting. I haven’t seen this little fact mentioned anywhere. I discovered it by closely observing my knitting. Mindfulness is such an underused skill.

Sorry to be longwinded about this, but it really blew my mind what happens to a stitch when it is placed facing “correctly”; the knitting does not create a hole. Why have we been taught to correct this mistake without understanding how to prevent the error in the first place? Such a simple thing, the awareness of orientation of a stitch. You can prevent the holes that often show up in gloves where the fingers are joined. It is possible to achieve joint invisibility by paying attention to how you manipulate a loop of fibre . . ..

I’ve always wanted to achieve invisibility and have achieved it in soc heels!

Published by Displaced and Dispossessed

Incredulous and scandalized by the state of America. View all posts by Displaced and Dispossessed